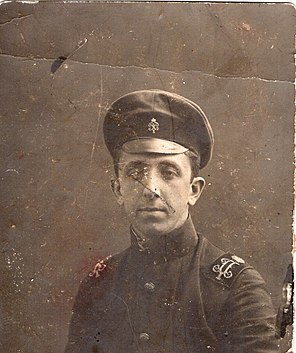 Gurevich was born in Odessa. In 1912 he finished commercial school and moved to Petersburg. He entered Polytechnic Institute and theatre school but finally chose the profession of an architect. In 1915 he changed his studying to Riga Polytechnic Institute at the architecture department. Later the Institute was evacuated to Moscow because of the World War II. In 1921 he graduated from the Institute with the degree in engineering (diploma work “Government House”). In 1921-1924 Guriev worked as a construction foreman, clerk of the works and assistant of chief engineer, later he reconstructed and worked on interior designs of destroyed mansions for foreign embassies.

In 1929 Guriev worked at State Joint Stock company of civil building – “Proektgrazhdanstroy”. At first he was a senior architect, then directed the group of typical engineering, later became the main engineer of that company. In 1933 he began to work with the group of architects such as Bykov N.A., Komarov L.K., Gluschenko G.I., Gokhman I.V etc. He started to do projects of apartment buildings, schools, hospitals, hotels and other civil buildings. He directed the building of low storey houses on Entuziastov Road. These houses and the project of the community in Khimki-Tushino caused great public interest. In 1941 Georgiy Guriev was on a business trip in Krasnoyarsk to project the houses for workers of evacuated factories and new military ones. In 1940-1943 Guriev-Gurevich was the main architect of the buildings in the central part of the right bank of the river in Krasnoyarsk. He directed the group of architects and worked out the projects of the apartment buildings near military factories and industrial objects of defense complex. He designed buildings in Moscow, Leningrad, Baku, Gorky, Ivanovo, Kazan, Saratov, Yalta.