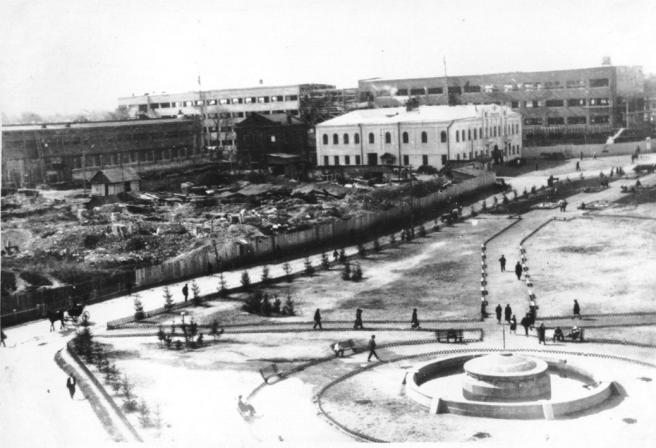 In 1930, a competition was announced for the projects of the House of Soviets, which had to include almost all the authorities of the newly created Ivanovo industrial area. The total size of the building was not more than 140 thousand cubic meters.

The project of the Leningrad architect Halperin V.M. won. The House of Soviets had to consist of a 4-storeyed southern building, located along the Aptechny Alley; the same, but a 3-storeyed northern building along the 10th August Street having had an extension with a balcony on the end that could serve as a tribune for the government; at the back a semicircular building with halls of congresses adjoined to the northern part; the buildings were connected by a central 8-storey building with solid glazing of the upper floors. The space in front of the main building was planned to be used for mass events.

Even then the building was considered to be not very successful. In 1936-37 a closed competition was held for the completion of the House of Soviets and the reconstruction of the already erected building, but all the projects that were participating in the competition weren’t realized. In 1937 the building was put into operation. Thus, the southern building is the only building of the huge House of Soviets.

The main element of the facade of the southern building is large and narrow windows, located close to each other, which creates the illusion of glazing. The internal space consists of long corridors without windows with rows of cabinet doors stretching along both sides of the corridor.

Since the construction of the House of Soviets has had a number of changes: in the 1950s, the brick walls were plastered and painted. On August 30, 1977, on the first day of the 8th All-Union Congress of the winners of the Komsomol and youth march in places of revolutionary, military and labor glory of the Soviet people, a panel with the bas-relief of Lenin and his phrase "... The Moscow, St. Petersburg and Ivanovo-Voznesensky proletariat ... proved, in fact, that in no way will yield to the conquest of the revolution "was installed in Ivanovo on the pediment of the House of Soviets, facing the central avenue of the city. The authors of the panel artists N.P. and V.V. The Rodionovs.